Skip to content
Dennis J. Snower of the Global Solutions Initiative and Katharina Lima de Miranda of the Kiel Institute for the World Economy propose the “Recoupling Dashboard” as a new theoretical and empirical basis for assessing well-being beyond GDP.

Many of the prominent challenges of the 21st century – including the rise of populism, growing nationalism, a backlash against globalization and multilateralism – arise from a decoupling of economic prosperity and social prosperity. While GDP per capita – our conventional measure of economic prosperity – has grown reasonably steadily over the past four decades, this growth does not appear to have been matched by a steadily rising sense of social prosperity, in terms of rising well-being within thriving societies. Nor has this economic growth been environmentally sustainable, with further adverse repercussions for social prosperity. The persistence of national, ethnic and religious conflicts around the world, combined with rising dissatisfaction among large population groups that feel “left behind” in both the developed and developing countries, attests to such decoupling of economic prosperity from social prosperity for significant segments of modern societies. Tackling the major challenges of our times will involve confronting the paradox of growing economic activity in an integrated global economy, accompanied by ongoing tensions arising from fragmented societies and polities.

A major problem in tackling the decoupling of economic and social prosperity is that politicians are far more sensitive to economic prosperity than its social counterpart. For example, when French President Emmanuel Macron taxed fuel to encourage the country’s transition to green energy at the end of 2018, he did not expect thousands of citizens to march through the streets in yellow vests. He apparently had neglected the possibility that achieving economic prosperity through “green growth” may leave large segments of voters personally disempowered and socially alienated. The same holds with regard to the massive protests in Chile that began with a subway fare hike and those in Lebanon, which were triggered by a WhatsApp tax.

“Tackling the major challenges of our time will involve confronting the paradox of growing economic activity in an integrated global economy.”

The sense of disempowerment and social alienation is experienced among many significant population groups in advanced and emerging economies, from inhabitants of America’s “rust belt” and Britain’s small towns to Africa’s unemployed youth. In short, in many countries around the world, economic prosperity, environmental performance and social prosperity are no longer aligned.

We propose the “Recoupling Dashboard”, providing a new theoretical and empirical basis for assessing well-being beyond GDP. It sheds light on the decoupling process and provides an empirical basis for mobilizing action by government, business and civil society to promote a recoupling of economic and social progress. Given that the purpose of government and business is to promote the public interest, the Recoupling Dashboard is a step toward suggesting that government and business decisions be based on assessments, not only of their impacts on GDP and environmental performance, but also on solidarity and agency.

The central conceptual insights of our analysis rest on the following claims: (i) Human well-being is about more than satisfying preferences for the consumption of goods and services. It also includes the pursuit and achievement of value-driven purposes. (ii) Since the success of homo sapiens is built largely on cooperation and niche construction, humans have evolved motives to socialize (particularly in groups of limited size) and to use their capacities to shape their environment. (iii) Consequently, personal agency and social solidarity have become fundamental sources of human well-being.

On this basis, we introduce two new, innovative indexes, agency and solidarity, to be examined alongside economic prosperity as well as environmental sustainability to gain a more balanced and profound understanding of well-being. Our agency index involves agency; it involves people’s need to influence their fate through their own efforts and is measured across ﬁve components “Labor market insecurity,” “Vulnerable employment,” “Life expectancy,” “Years in education” and “Conﬁdence in empowering institutions”. Our solidarity index covers the needs of humans as social creatures, living in societies that generate a sense of social belonging. With respect to social belonging, “solidarity” may be considered synonymous with “social cohesion” and “social inclusion”. Our Solidarity Index is measured across three components “Giving behavior,” “Trust in other people” and “Social support” .

“The Recoupling Dashboard is a step toward suggesting that government and business decisions be based on not only their impacts on GDP.”

Figure 1: The relation among the four indexes 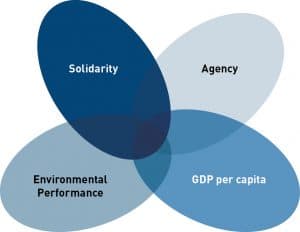 We argue that agency and solidarity – alongside economic prosperity and environmental sustainability – cover fundamental human needs and purposes present in all cultures. When people’s important material needs have been met, when they feel securely and meaningfully embedded in society, when they have the power to influence their circumstances in accordance with self-determined goals, and when they live respectfully of planetary boundaries, then they achieve a wider sense of human well-being than when they simply maximize GDP growth. Failure to achieve any of these ends is associated with suffering. The inability to meet basic material needs signifies extreme poverty; lack of agency signifies a lack of freedom, self-expression and self-determination; failure to achieve social solidarity is associated with loneliness and alienation; and living unsustainably means robbing future generations (as well as others in the current generation) of the opportunity to lead flourishing lives.

The four goals – agency, solidarity, economic prosperity and environmental sustainability – are not consistently substitutable for one another. The gains from agency and solidarity generally cannot be translated into temporally invariant money terms, whereby economic prosperity is measured. In order to thrive, people need to satisfy all four purposes – their basic material needs and wants, their desire to influence their destiny through their own efforts, their aim for social embeddedness, and their need to remain within planetary boundaries. Agency is valueless when one is starving; consumption has limited value when one is in solitary confinement; and so on. Furthermore, the gains from agency, solidarity, economic prosperity and environmental sustainability are different in kind and thus not readily commeasurable.

That is the reason why our indexes of agency, solidarity, economic prosperity and environmental sustainability are to be understood as a dashboard. Just as the dashboard of an airplane measures magnitudes (altitude, speed, direction, fuel supply, etc.) that are not substitutable for one another (e.g. correct altitude is not substitutable for deficient fuel), so our four indexes are meant to represent separate goals. Only when a country makes progress with respect to all four goals can there be some grounds for confidence that a broad array of basic human needs and purposes is being progressively met.

“The Recoupling Dashboard offers a new
approach to the evaluation of human well-being.”

The Recoupling Dashboard includes data from more than 30 countries from between 2007 and 2017. Summarized on an X-Y plane, the Recoupling Dashboard gives a visualization of how the relationship between the four dimensions varies through time and across countries. Our data shows that solidarity and agency develop differently over time and across countries compared to indexes of GDP per capita and environmental sustainability.

Figure 2: Comparison of indexes of the four dimensions of human well-being in 2007 and 2018 and over time for selected high-income countries

United States: From 2007 to 2018, there is an increase in GDP per capita, accompanied by a stagnation in agency and a decrease in solidarity, as well as a slight increase in environmental sustainability. The United States has experienced a progressive decoupling of GDP from agency and solidarity in recent years, particularly after the financial crisis in 2008.

Germany: From 2007 to 2018, the Agency Index rose substantially, whereas the Solidarity Index slightly increased as did GDP per capita. There was also a decrease in environmental sustainability. The authors term this “liberal communitarianism.” Over time, one can observe that agency continues to rise along with GDP per capita, while the development of social solidarity has stagnated.

United Kingdom: From 2007 to 2018, the Recoupling Dashboard shows a rise in agency and GDP per capita, while solidarity has fallen, indicating the country has become more neoliberal. Over time, the United Kingdom has experienced a progressive decoupling of GDP from agency and solidarity, particularly after the financial crisis in 2008.

Countries with a high GDP are not necessarily ones that show high solidarity or agency. In fact, many countries growing in terms of GDP per capita show a substantial decrease in the solidarity index over time. Such a disconnect is an indication of a decoupling of economic and social prosperity. In the Development over Time section in Figure 2, the Recoupling Dashboard shows that solidarity and agency follow time paths that are distinct from GDP per capita.

In the Comparison to Average section in Figure 2, the baseline square (in blue) represents the average values of the four indexes across the countries in the base year (2007). Comparing the green and red line shows in one glance how a country developed over the past decade in each of the four dimensions. Comparison with the blue square and across the different graphs allows for cross-country comparisons.

As we can see, the time series and cross section evidence indicate that solidarity and agency are phenomena that are distinct from economic prosperity and environmental sustainability.

Figure 3: Correlation between the indexes and GDP per capita across countries 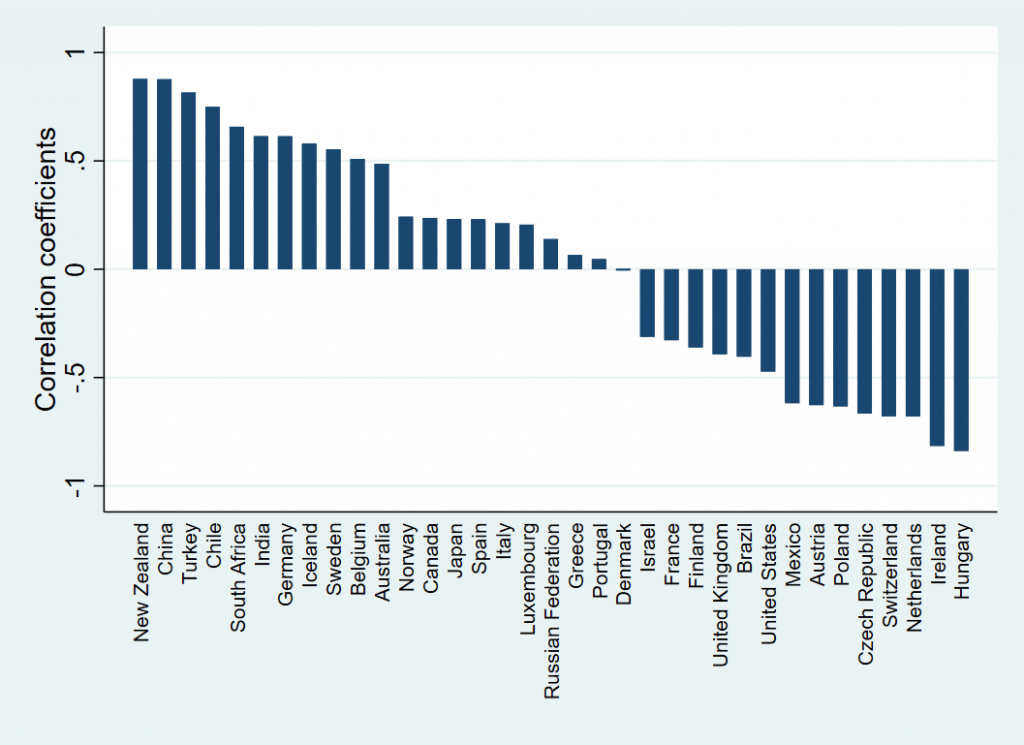 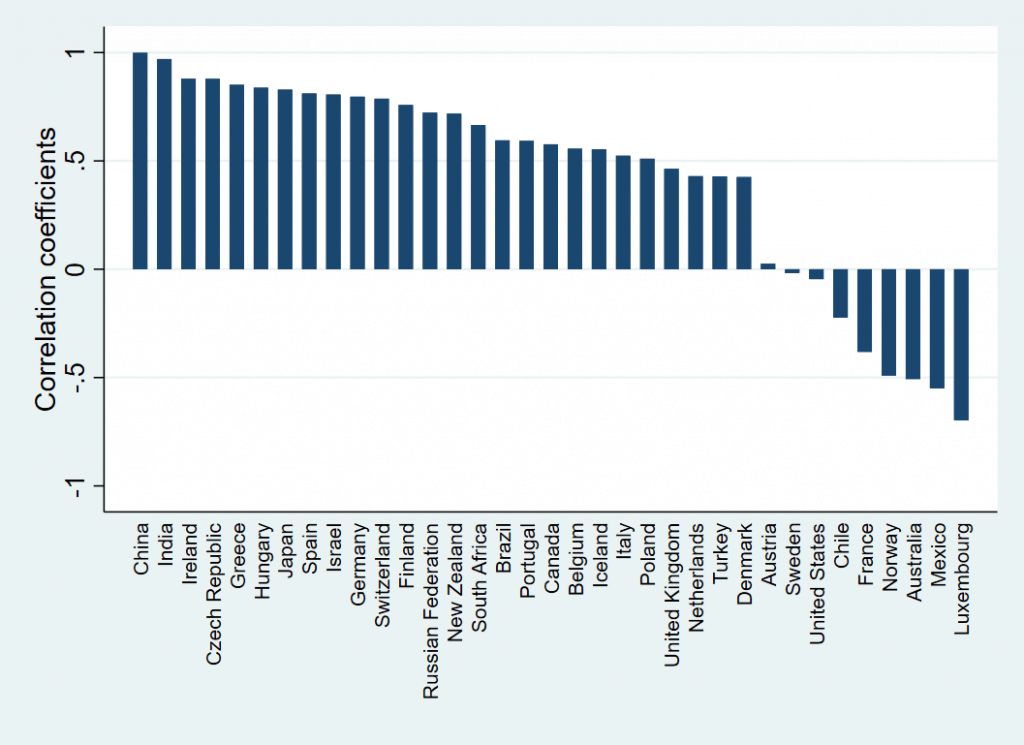 Figure 4: Correlation between the indexes and GDP per capita across countries 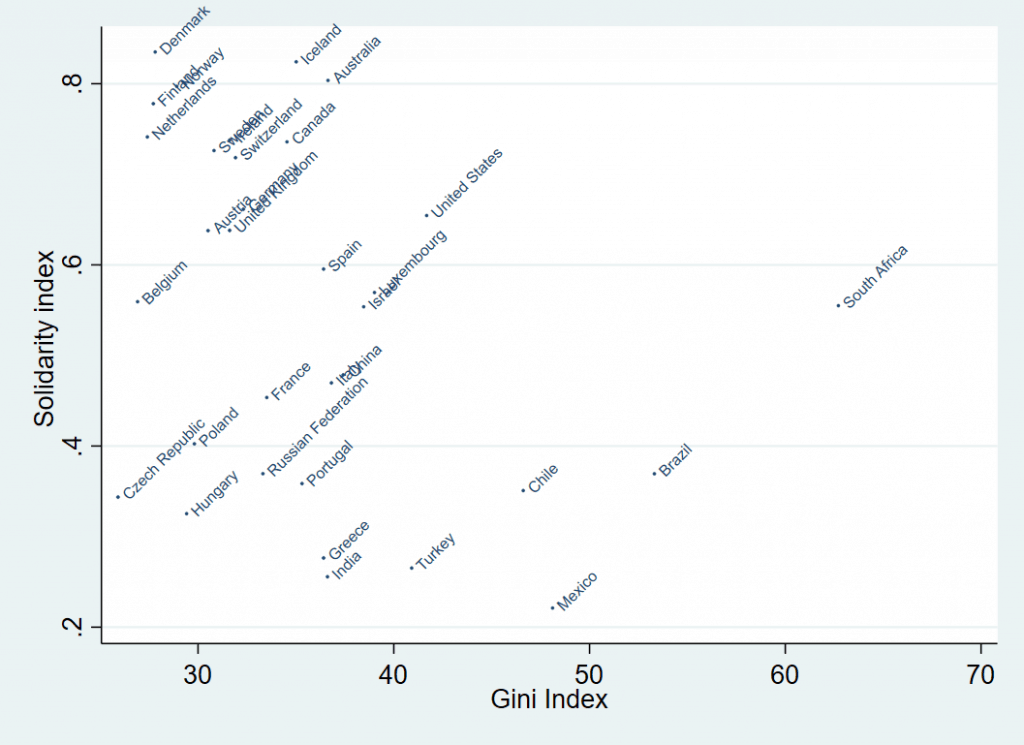 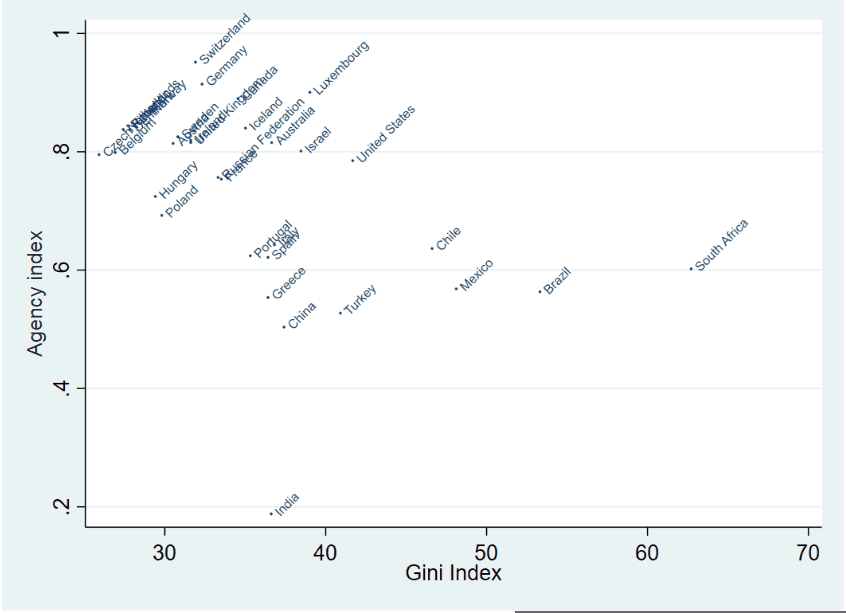 The Recoupling Dashboard offers a new approach to the evaluation of human well-being. With further elaboration, the Recoupling Dashboard can become a powerful tool to assess how decisions by governments and businesses affect human well-being. Currently, policy measures are evaluated primarily in terms of their impact on GDP. Similarly, business decisions related to production, employment, and future investments are made primarily in terms of maximizing shareholder value. The Recoupling Dashboard is a first step towards reshaping governance systems in both government and business, with the aim of recoupling economic and social prosperity.

The Global Solutions Initiative is a global collaborative enterprise that proposes policy responses to major global problems, addressed by the G20, the G7 and other global governance fora. The policy recommendations and strategic visions are generated through a disciplined research program by leading research organizations, elaborated in policy dialogues between researchers, policymakers, business leaders and civil society representatives.