Towards an intellectual backbone of the G20

The Global Solutions Initiative provides an intellectual backbone for the Group of Twenty (G20) through its support of the Think20 (T20) process each year. This intellectual backbone builds bridges between the policy recommendations of successive G20 Presidencies, between researchers and policymakers, between researchers and private sector implementers and between successive generations of thought leaders.

Founded in 1999, the Group of Twenty (G20) is the central forum for international cooperation on financial and economic questions. The G20 is comprised of nations with the most advanced and emerging economies in the world: Argentina, Australia, Brazil, Canada, China, France, Germany, India, Indonesia, Italy, Japan, Mexico, Russia, Saudi Arabia, South Africa, South Korea, Turkey, United Kingdom, United States and the European Union. The G20 economies collectively account for two-thirds of the world population and 80 percent of the world’s Gross Domestic Products (GDP).

Governments and central bank governors from these nations meet year-round at the ministerial-level. Outcomes from the ministerial-level meetings are brought together at the annual G20 Summit, where leaders prepare and implement their decisions based on the findings in a communiqué. Every year, a different G20 member country assumes the presidency starting from December 1 until November 30. 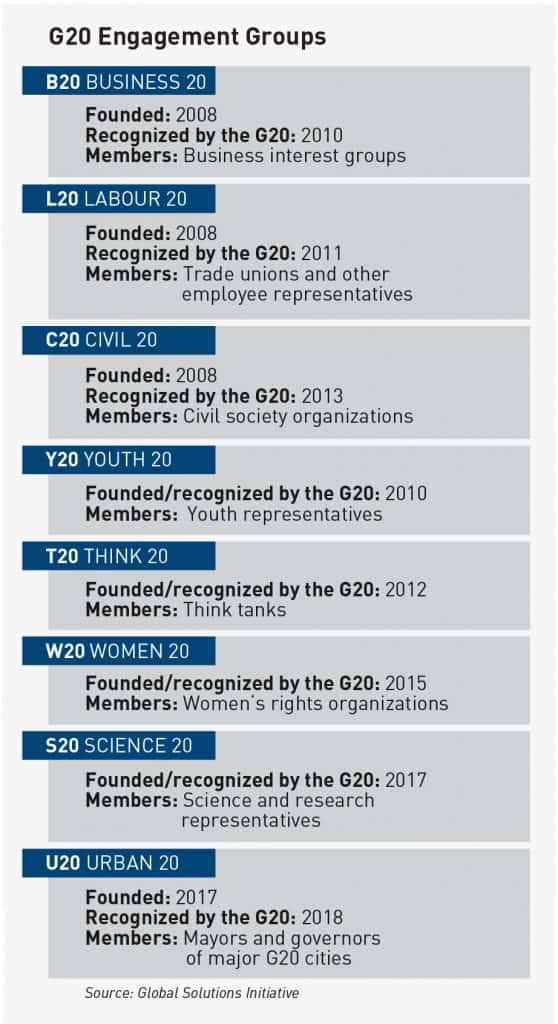 Think20 Engagement Group: The research and policy advice network of the G20

Initiated in 2012, the Think20 (T20) engagement group is independent from national governments and comprised of prestigious think tanks and academia from the international community. The engagement group does not advocate or campaign around specific ideas, but serves rather to generate insightful policy proposals, analyzed by high-level experts. These proposals provide an analytical depth to G20 discussions that assists G20 leaders in developing concrete and sustainable policy measures centered around G20 priorities.

Each year, under a new G20 Presidency, the T20 creates Task Forces to structure their proposals around the most critical issues, driving policy innovation.